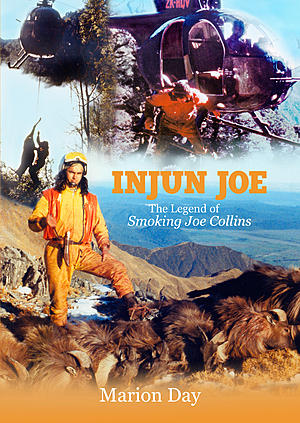 Hardcopy out of print.

Published by The Halcyon Press NZ

This is the life story of ‘Injun Joe’, born Wellwyn Harris Collins, in 1950. His mother was half-caste Maori of the Ngati Kahunanu tribe, his father a Scottish-Irish immigrant whose family had substantial holdings in Hawke’s Bay.

Joe became well known as an elite hunter–helicopter pilot, one of New Zealand’s most dangerous occupations of the time, in what is now known as The Last Great Adventure. Unafraid of his own fears, he lived to hunt, then fly, at times with a blatant disregard for authority.

His name is inextricably linked to the exploits that typified the early days of aerial hunting in New Zealand – when the industry was wild and young, and anything could happen, when helicopters and cockpits replaced horses and saddles.

Joe, an imperfect hero, always attracted attention, whatever he did. He lived life with a single-minded passion that sometimes led to obsession, but his courage, steel nerves and kindness gave him a compelling quality that appeals to something deep-rooted in the average person.

“Sixteen years after his death, people still speak of his sharp eye, his fearlessness and prowess as a venison hunter pilot – still whisper his name as one of the country’s most heroic hunters of the time.”

Marion Day, Joe’s partner of some sixteen years, has agreed to tell his story – good and bad – based on the facts drawn from various journals and diaries that Joe kept throughout his life.

“From the first time I met Joe, I could never tell if he wanted to live forever or was ready to die at any moment. Each time he fumbled into his flying boots, sometimes in the dark before sunrise and sometimes returning in the dark after dusk, I knew something was happening – or was about to happen.”

Love and Loss, one of four beautiful anthologies published by Exisle Publishing (NZ), includes Marion’s short story Small Things. Her story beat hundreds of other entries from around the world. Love and Loss, Human Kindness, Fear and Courage, Struggle and Success can be found on Amazon as well as bookstores throughout New Zealand, United States, Canada, Australia, the United Kingdom and Ireland. Direct Link: https://exislepublishing.com/product-category/emotional-inheritance/timeless-wisdom/

Marion is delighted to announce that every book she has written is eligible for the Public Lending Right for New Zealand Authors Royalty Scheme 2020. To meet this criteria, there must be more than 50 books (each title) in National Libraries in New Zealand. Every book taken out, receives a 3 cent royalty paid yearly. A great help to authors.

Marion is a member of: